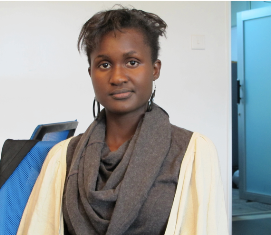 Simple, efficient and effective, the application developed by M-Farm allows rural Kenyans to know the market price of the products they sell in regional markets. They can also use the service to transport their crops or buy fertilizer.

And the best thing about it is the business was built by three young women still in school, after a professor told them about a mobile-app competition. They entered and won, receiving €10,000 to develop their application.They next created a company that was quickly selected by m:lab, a Kenyan incubator.

“The application relies on three features,” co-founder and head of marketing, Linda Kwamboka, 23, explains. “The starting point was the price-enquiry module: the farmer sends an SMS to the code 3535, noting the product and the location they’re interested in, and in less than 10 seconds the service sends them the price, which lets them decide where to sell.”

For example, sending an SMS saying “price, cabbage, Embu” will return the average price on a 126kg bag of cabbage in the city of Embu. But by typing “price, cabbage, Nairobi,” a farmer finds out that they could sell the same bag for five times the price in the capitol. It’s up to the farmers whether the difference in transport costs make the trip worth it.

The two other functionalities allow farmers to buy and sell together via SMS.

But companies in incubators like m:lab are trying to create businesses, and so there’s the question of a business model. This is also simple. M-Farm charges 10 Kenyan shillings per SMS, about 10 cents. Kwamboka says that farmers have no problem paying this fee because it allows them to save thousands of shillings.

A small detail I teased her about: since I didn’t have any credit when we did the demonstration on her phone, Kwamboka had to go out and recharge her pre-paid card. An ever-present problem that mobile fans always forget to mention, and something I’ll talk about again.

No matter what, the service is interesting. In less than a year (the company started in November 2010), the regionally limited pilot project already has 2,000 users in its database. 400 farmers use the feature that lets them buy or sell together.

I’d imagine they don’t stop here. Do we wish them good luck?

While AI can help in analyzing and utilizing large amounts of data, conversational UI or...

Millions of sign-language users can’t communicate with your organization

Customer service – a path to a fulfilling and successful career

Putting the customer front and center of our business can give you the confidence to provide...