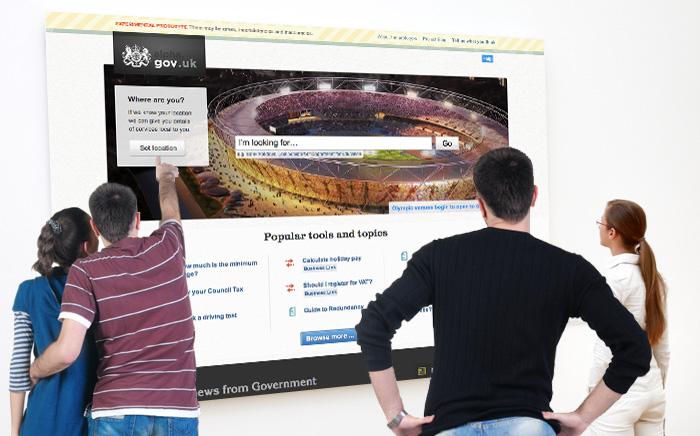 “Alpha.gov.uk is an experimental prototype of a new, single website for UK Government, developed in line with the recommendations of Martha Lane Fox’s Review.”

The alpha.gov.uk prototype costs £261,000, but it is a minor investment compared to the £128 million the government is currently spending on maintaining its fleet of websites. It is an investment that in less than 10 weeks has produced a functional prototype giving users something tangible to respond to. Such an agile approach allows for early feedback saving money in the long run and delivers a better result.

I think you and I can agree launching such a prototype is a bold move by the government… and indeed it is in us the real value of the project is but more about that in the second half of this article. First let’s take a look at the website…

It’s all about you

Traditionally many bigger organisations fall for the temptation to use their internal hierarchy as blue print for their website’s navigational structure simply because it is easy. But this is rarely of benefit to the users, who just want a problem solved, but don’t care which department solves it.

With the prominent and helpful search facility Alpha.gov.uk makes a clear statement; We are here to help you, The User!

The choice of a plain English tone-of-voice also makes the site feel approachable with statements talking directly to the user. Simple, yet effective communication that combined with location-based content gives a real personal experience.

This user-centric approach is repeated throughout the site. For example no longer do you need to read through every single field of a form. Instead the form modifies itself to fit your circumstances and needs. Another example is the handy business cards provided when you search for a local driving test centre. Although I would love to see an option to send the individual cards to email or mobile phone so it becomes portable and available when/where needed.

The site design as a whole makes an effort to step away from the perception of being a traditional government site. Adding banner advertising may be a step too far and could prove counter-productive to the credibility of the site but the funding it would provide cannot be ignored neither can the ability to connect people to local businesses.

UPDATE: The banner advertising are meant for internal initiatives, not for private business.Thanks to Paul Annett.

Another significant ambition is to provide a large range of video content and shows that the Alpha team understands that film has moved from viral to mission critical because of the change in how users consume content; They scan, listen and watch. They no longer read full blocks of text from start to finish.

Prototypes such as alpha.gov.uk brings a user experience vision to life to get early feedback, but it is not a complete website and doesn’t cover all the angles and the Alpha team makes it clear in that the prototype doesn’t support older web browsers.

But that is not to say the Alpha team aren’t thinking ahead which is evident in blog posts such as this about the importance of accessibility for the final product.

The challenges to come will be to maintain the simplicity of the user experience and it is going to be interesting to see how the site will cope with content for unique interest groups such as teenagers or elderly people and how the site will manage and leverage valuable user-generated content from other associated, but external channels such as Facebook.

It is easy to say the words “user centric” but really meaning it is another matter and the Alpha team really means it. The proof is in the pudding as they say and for alpha.gov.uk the proof is not only that they have create a user-centric interface, but that they have opened up the prototype to the public. This may actually be the single biggest leap in the project.

And they are listening. Not only can we all send our feedback directly from the prototype via the “tell us what you think” link, we can also comment on the Alpha blog; we can join the discussion directly on Facebook and Twitter and we can write comments on our own corners of the web just as I have done in this article.

The Alpha team is effectively crowdsourcing feedback from anybody interested, whether they are digital professionals or not. Instead of performing controlled user-testing with a limited number of users, they have simply asked the whole population: “What do you think?”

And people are actively responding and blogging their thoughts because a site like this will affect us all.

According to renowned usability guru Jacob Nielsen “The best results come from testing no more than 5 users”. After that the benefit of additional users is limited. In other words testing with 10 users instead of 5 doesn’t really matter as the 5 would have provided enough feedback to the core user journeys.

But what if you ask thousands of people instead of 5? Realistically only a fraction of the UK population will respond to the alpha.gov.uk challenge but this may still be thousands of people and will result in a range of obscure ideas. And between them there will be stars such as:

“Wouldn’t it be great if the examples under the search box pre-empties what the user is looking for based on what she has previously visited on the site?” – A future predicting navigation feature? Like it.

By using us all as a social sounding board not only will alpha.gov.uk go from a good site to a great site, it allows us all to be part of the big digital society by taking responsibility and pride in the project.

We are all part of the Alpha team now.